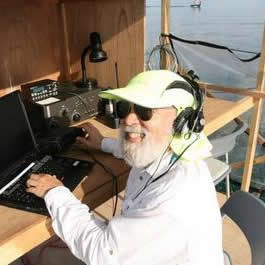 Tom was first licensed at age 11 in The Bronx, New York, which explains the 2 in his call sign. He operated as WV2ASJ, WA2ASJ, and K1EQT, but eventually let all amateur radio licenses lapse.

After a forty-year hiatus from amateur radio, during which time he always had an HF receiver close to hand, Tom jumped back into the hobby as ND2T in 2001. He loves the challenges of tight integration among antenna systems, radios, computers, and networked information, especially for the high-rate contesting such integration allows. Tom is a member of the competitive multi-op team at W6YX, He has contested from K6IDX (W6OAT), W7RN and KH6LC.

Tom is a member and Past-President of Northern California Contest Club, a charter member of CWops, a member of the Stanford Amateur Radio Club, CDXC, and of PL-259 CC. Tom is Treasurer of the International DX Convention (“Visalia”) in odd-numbered years. He is also President of NCDXF.

Tom is making up for those lost solar cycles by working all the DX he can (325 confirmed). Tom was a team member at BS7H (Scarborough Reef), K4M (Midway), VP8ORK (South Orkney) and NH8S (Swains). He did the antenna preparation work for K9W (Wake). He is looking forward to QSOs with you from Archipel Chesterfield.